Charles Parker B. 27 Februar 1800 – D. 1852 was a maker of professional whistles in the first half of the 19th Century in Birmingham. He was known as Charles Parker Junior and  the son of Charles Parker who was in the same business as Button Maker, Brass Founder and Military Ornament Maker. 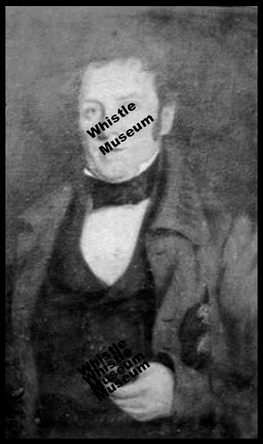 The 3 next Short SNC –  short single note conical whistles were a Parker Design
The one on the right side is Parker’s work William Dowler( & Sons) Kept
making these up to later 1890s, 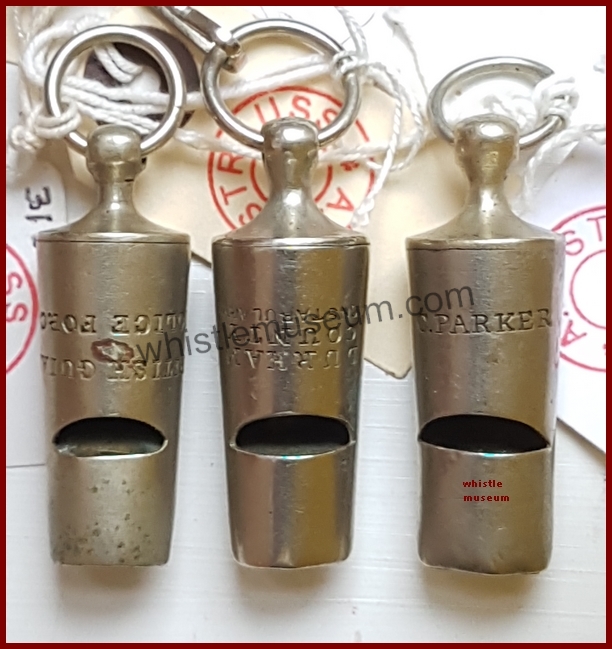 Although Charles Parker died early  in 1852 he had a great impact .
As inventor he was probably the Inventor Of the Escargot Button whistle – here in photo he is holding something that looks like a reel and may well be a large button whistle , THE FINAL ANSWER TO THIS MAY BE AT THE KEW ARCHIVE of registered patents & Designs.

(If so, I think we now know what to look for; a large Naval Rail way or Military Button sides whistle with buttons which may have on back
C. Parker Birmingham or ones having the Shell button without the shank.
As predicted before, Button Manufacturers were making whistles & it was only natural for Parker as Button & whistle maker to invent the first.
We know that William Dowler his successor did.

He was also the first to design and make the TNC –  TWO NOTES CONICAL WHISTLE  (Which many years later was nick named Beaufort Because of  lord Beaufort) ,  by that I mean  the particular design with a Bubble top which became the Industry standard for this type. (Albeit variations were made  before and after)
whistle with the common STANDARD design in the late 1840s, and the Wedge diaphragm. 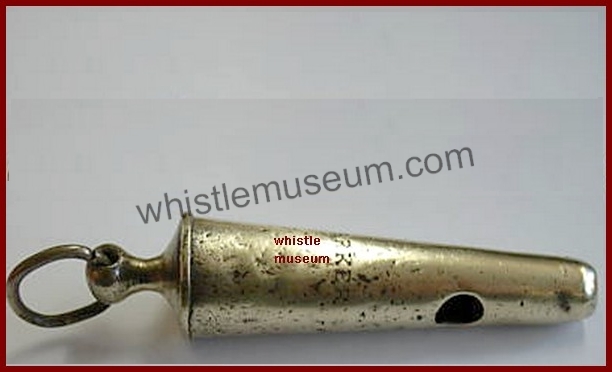 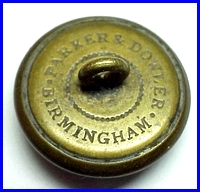 His connection to William Dowler (Later & Sons ) In the early 1850s  is a fascinating find, apparently it seems that they knew each other since their teens when Parker was apprenticed starting in 1815 with Thomas Dowler who was in Partner ship with Powell, (still has to be verified), at the old workshop of  Thomas Dowler the elder at Gt. Charles Street, later William Dowler Jun. may had been his agent, and after Parker’s death in 1852 he went into partnership with his daughter Marry Hanna  Parker, advertising as Parker & Dowler makers of Railway whistles Buttons & Military ornaments, the partnership lasted until December 1856.

The history of this newly discovered maker is entwined with the history of few companies mostly The Merry family & Dowler ( Footnote)*
The 42 Cherry St. Birmingham can be used as a center point to tell some of what I had found up to now. 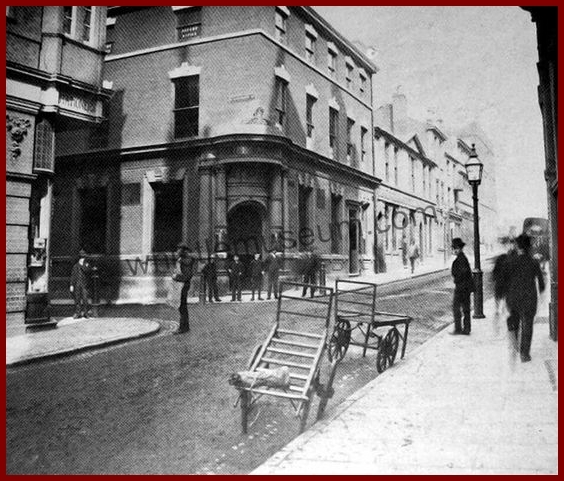 The address of 42 Cherry St. (# 40 & 41 were used by the Merry family as well in various years) served as a Brass foundry and all manufacturers mentioned were Button &  Military Ornament Makers, beside other goods. since 18th century
This address served as a PIVOTT point in my research, Here are the various companies occupying The address as mentioned by various sources in Chronological order :

Between the years 1854 to 23rd December 1856, when the ‘copartnership’ officially disolved with a notice signed by Mary Parker & William Dowler, ‘Brass Founders & Military ornaments manufacturers’.  Dowler & Parker , They appeared in directory listings and  whistles are stamped Parker & Dowler along the body of Beaufort Type whistles  (Two Notes Conical Whistle) whistles. **
Albeit Mr. Parker Died at 1852  Mary Parker (His Daughter) kept running the Business
Here is a listing from 1855,

In 1858 William Dowler appears at the same address 42 Cherry st. on his own. 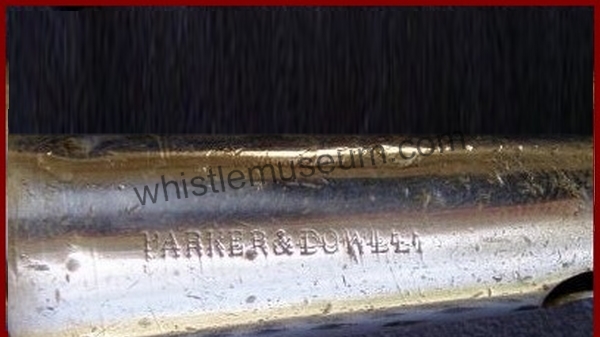 Dowler continued the making of whistles designed and made by Parker from the
42 Cherry St.  address after Parker passed away.

A Beaufort type whistle made by Parker c 1847 to 1850 .***
Parker stamp of his name facing top was later adopted by Dowler, who marked his whistles in the same manner. 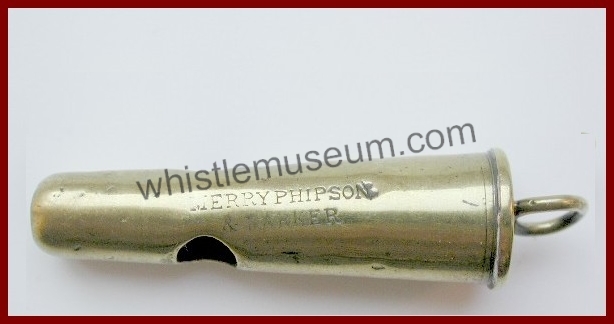 A Merry Phipson & Parker Brass c 1840 to 1845. Two notes Conical whistle (T.N.C.W) years later this type was named ‘Beaufort’ by the workers at the
J. Hudson & Co. workers. another view of this Beaufort whistle . 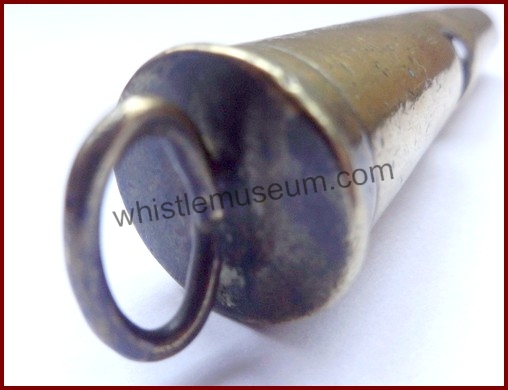 Stamped ‘Merry Parker & Merry ‘ it does have the flat top but the ring quality makes one doubts it is a Dixon,  so do other details, so I tend to think some of these were actually made by Parker, It seems that Parker ordered few whistles from Dixon as well. (There are C. Parker stamped Conical whistles with Ivory Mouth Piece some
stamped C. Parker and one C. Parker Late Merry Parker& Merry, as he was listed after leaving Merry ) 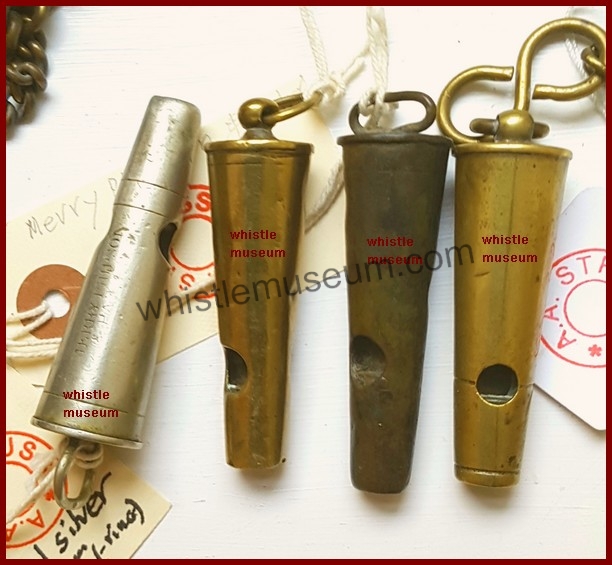 Three whistles possibly made by Charles Parker and on the left and one by J. Dixon & Sons, First from left a German Silver Beaufort stamped ‘Merry Phipson & Parker’ made Pre 1845, 2nd is a Brass made by Parker stamped ‘Merry Parker & Merry’
c. 1847   3rd one has the same stamp c. 1846 right one seems to me a Dixon & Sons Made in the same period , note the seam is going through window, a feature the other 3 do not have.
Here is a closeup of the two and the Dixon on the right has the slightly domed top ( Typical to Dixon at that era) 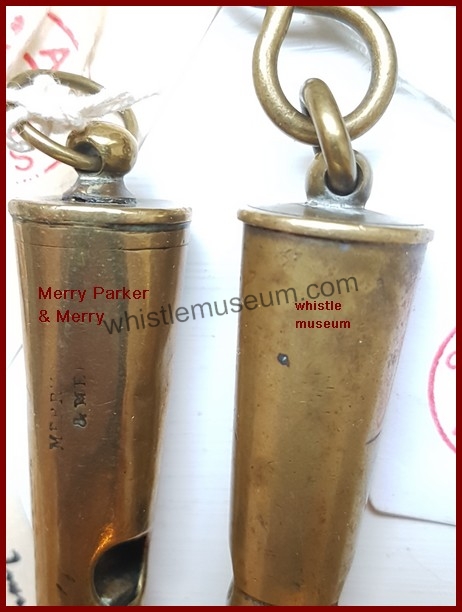 [Two Beaufort of same construction stamped Priest London and Paulkner / Faulkner surfaced 2017 It still has to be closely checked to find if these two were made by Dixon or Parker, as of now these seem to be J.Dixon & Sons.]
* It seems that up to 1860s Dixon & Sons never stamped whistles with their name BUT many whistles made by them for retailers prior to 1860 were stamped with
The retailers name .

Right C. Parker Made short single note conical whistle (SNCW)  C. 1847- 49
Mid one is a Durham County Constabulary, Note the stamp toward top typical to  Dowler , Left British Guiana Police Force made later by Dowler.
The Mid one ( Durham county const. force est. 1839 ) is by William Dowler 1850s and seems it may be the first whistle with a named Force stamp.

History
Charles Parker , C.  Parker (Brass Founder, Manufacturer and Inventor ) , Military Ornaments and Plated Buttons, Railway whistle  42 Cherry St
Charles Parker did his apprentice between 1815 and 1822 (update 1817 -1824) with William & Thomas DOWLER (*Powel was a mispell) Brass founders, his dad was Listed as Charles Parker the elder and he was the younger. They were both said to have been of Lint House Hill Top Near Bromsgrove, Worcestershire. His dad was a Victualler (One who supplied the army) .
Charles Parker joined Merry & and Phipson c. 1939,  the partnership dissolved c 1845 and in later years we see C. Parker Staying in 42 Cherry St.
Here is a clip from 1849 Directory entered 1848 , In other Trade Directories of these years he appears as a Railway Whistle maker, 42 Cherry St. and Home in Gravelly Hill.

1849 Parker Charles, (late Merry, Parker, and Merry,) manf.. of military ornaments, gilt and plated buttons, shoe and garter clasps, inventor of the improved letter clip & rlwy. (Railway) whistles, 42, Cherry st.Home, Gravelly Hill.
He Registered a whistle patent between 1847 to 1849
Up datet Nov. 2020 It was for a BUTTON WHISTLE,
this amazing news after many years of trying to find the origin of the Escargot shaped button sides whistle, At the time named Railway whistle.
A photo of him holding the whistle was sent to me in 2020,
This absolutely astonishing discovery deserves a special article which is dew shortly.

Some additional notes relating to Parker & The Merry Family History .

The history of The Merry family can be seen by taking a look at the upper chart of 42 Cherry St. & Dates, a lot more can be added but albeit the article is about whistles I thought I may bring two examples of their fine Brass work
So here is a Candle extinguisher by Merry Phipson & Parker Number 908 Registered design 1841 . 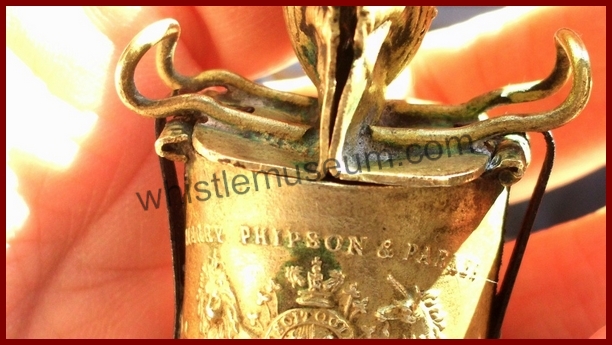 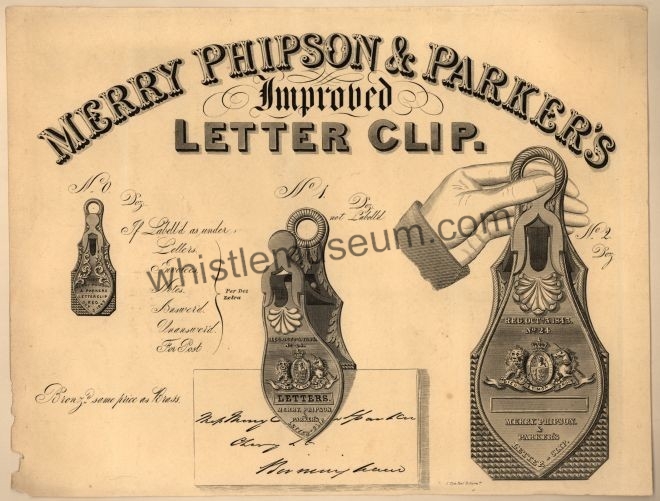 And a Paper Clip, Merry Phipson & Parker were well known for their paper clips see many in google image search as I did , Charles Parker was the Inventor of the
IMPROVED PAPER CLIP & the Railway Whistle. 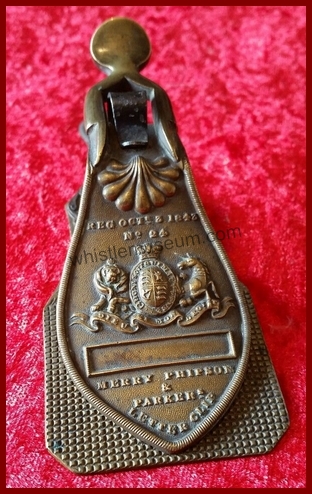 They did have few dozen models and some registered designs but one can certainly be impressed with the fine workmanship .
Further info and whistles and dates will be updated.

A new whistle found in my photo archive ( Sorry , a bad photo will update with a clear one  ) makes a big difference it looks like it is a J.Dixon & Sons made or … well I may have to reconsider some of the whistles as to the maker James Dixon & Sons or C. Parker  …
stamp is : “C. Parker Late Merry Parker & Merry”  (Meanwhile The same type of whistle with the stamp C. Parker was noted.)

* The connection with Dowler is absolute news it is deducted from whistles found and by the address.
** I did not find the source for the exact year Dowler registered at this address But in the 1854 directory he was there (42 Cherry St. ) under W. Donler (with what seems to be a spelling mistake)  and in 1857 He was registered there and living in Soho Hill.
William Dowler entered two marks, both ‘WD’, with the Birmingham Assay Office, as a military ornament maker, on the 11th June 1857.

Notes:
Addititonal news and photos to be added.
Comments are welcome.
* I would like to thank Mr. Collin Yarwood & Jenni Yarwood  direct Descendants of the family for their help with Photos and more info that I added after article was written, the two are very serious researchers of their family history & documents.
(Hats off ) with notes and material after the article was posted. THANKS !!!
** On dec 2 2020 I : I moved this assumption to a foot note and changed
it was based on the fact that railway whistles were of the two notes conical shape (Beaufort) and it turned out it may well be a Button whistle.

Article by A. Strauss , all right reserved  2017, Please respect and mention quote when used. I believe this original research would appear in other blogs or books without credit, so welcome again, and thanks for reading.

any questions or updates please send info@avnerstrauss.com if you wish to ask about a whistle It is more likely I will respond fast if there is a photo attached.

One thought on “Charles Parker, A Birmingham Whistle Maker History and News about Dowler & Sons A.Strauss”